6 truths about ice and injuries 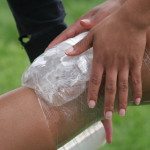 The use of ice to treat injuries is as old as we can remember. Perhaps, you have already used it? Here are six truths about ice that will help you better use it.

An application of about 20 minutes to an injured ankle reduces nerve conduction velocity of about 33% and increases our tolerance for pain. Advantage of using cold could be useful in the context of injury, such as after a surgery to the shoulder or abdomen and after a difficult birth delivery. Scientific evidence of cold analgesic have been established for several types of health problem. However, nothing is perfect. For example, some authors question the cumulative effects in the medium and long term, of repeated use of ice. According to them, the relief would be temporary.

Applying ice to your calf for a period of 20 minutes reduces the skin temperature of 14 to 17 degrees Celsius. The internal temperature of muscle would however only decrease about 4 to 6 degrees. This is a significant difference that calls into question the benefits of Ice for deeper tissues such as the lower back or those located under a relatively thick adipose tissue.

Do not put ice on damaged skin (eg. wound), if its sensitivity is impaired as it is the case if you are suffering from a circulatory or systemic disease such as poorly controlled diabetes. Also, remember that the analgesic effect also cuts you from your biological alarm system that is pain.

The application of more than twenty minutes of ice decreases the speed and power, while an application of only ten minutes would have much less effect on some of these parameters. It is recommended to test first the reaction from your body before using it in the context of a sports performance.

Inflammation is a normal stage, desired and essential to the repair and healing of injured area. It depends in particular to an adequate blood circulation, the lymphatic system, chemical reactions and many exchanges between different human tissues. So this is a complex phenomenon which is also linked to several factors, which takes place at the location of injury. It may also extend to the entire body, as in the case of arthritis. Even today, the inflammation is poorly understood in the physiological process. The lack of effective treatment against arthritis is a good example. To date, no scientific study has been demonstrated that inflammation is reduced by applying ice to an injury. The only studies that have been made on this subject have been conducted on the skin of animals which was cooled to temperatures below ten degrees Celsius, which would be impossible to duplicate in humans. Also, interventions took place only fifteen minutes after the injury on the animal, a scenario that significantly differs from the clinical reality. The ice would also be ineffective in reducing inflammation that is located within the muscle after intense efforts.

When applied, the ice should ideally be wrapped in a damp towel. This would provide a more effective decrease of the temperature of the skin. There is no universal consensus on the ideal duration and frequency. The type of injury, age, health status and individual susceptibility are factors which alter the situation. However, it can be said that application of fifteen to twenty minutes usually produces good results in terms of reduction of pain.